RONAL GROUP: Standstill is not an Option

For the RONAL GROUP, a leading international manufacturer of light-alloy wheels, a production standstill due to an IT breakdown would be catastrophic. The market for automotive suppliers is highly competitive and production lines run on a tight schedule. This is why the company decided to outsource the operation of its highly available ERP system on IBM Power Servers for its locations in Switzerland, Portugal, Spain and France to ITpoint, a Swiss managed services specialist. ITpoint provides RONAL GROUP with IBM expertise and 24/7 support, so the company can focus more on its core business. Here is the story of their successful collaboration.

Starting Point
The IT department of RONAL AG provides the IT strategy for the entire international RONAL GROUP. RONAL AG IT is clear about its role as a business enabler for the RONAL business organization. In order to guarantee smooth functioning of the company’s entire IT infrastructure, the RONAL IT team provides software solutions and tech services according to clear specifications, standardized according to ITIL best practices. The Infor XPPS (Infor Xpert) ERP system is absolutely indispensable to their work. This ERP system runs on IBM Power Servers (IBM i / OS400) and is a core application in RONAL GROUP’s highly efficient production process. The availability of this core system is of the utmost importance, because when the ERP solution comes to a halt, so does the entire production line.

The Challenge: 24/7 IBM Power Know-How
The RONAL GROUP always operated under the motto «IT on the spot». Until recently, it had its own IBM Power (IBM i) servers at almost all production sites. However, the knowledge and resources required to effectively run the IBM i / OS400 was not available at all locations. The Swiss IT team had to regularly call in IT colleagues from other countries, which took too long in emergencies and certainly wasn’t an efficient solution for the long term. On top of that, RONAL lacked the around-the-clock support they needed. The IT team at RONAL AG in Switzerland were faced with more than they could handle.

The Solution
When it came time for a hardware renewal of the IBM Power machine in Härkingen in 2014, RONAL AG took the opportunity to find a better solution for system operation. The backup system replication via Mimix required a second machine that RONAL AG did not have in Switzerland, and mirroring on an existing power server at RONAL GmbH in Germany was out of the question because the Swiss system contained sensitive personal and financial data that RONAL AG did not want to send data abroad. So where to go with two IBM i systems in Switzerland? 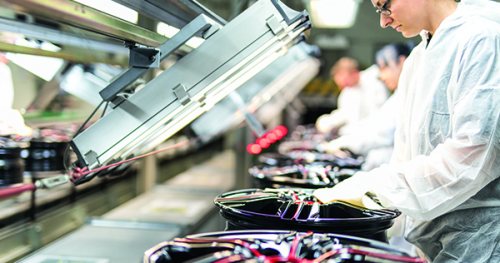 To the Swiss data center of an IBM Power specialist!
RONAL AG carefully considered the offers, concepts and references of two providers. Following a thorough evaluation, the company decided to partner with ITpoint Systems AG. The transition from their on-site physical IBM i/IBM Power infrastructure to a flawless, powerful and guaranteed 24/7 managed service was carried out in three steps:

The RONAL GROUP now enjoys the convenience of having all its IBM Power services provided as a guaranteed, managed service by the ITpoint data center.

Advantages
The outsourcing of IT tasks is often met with resistance from internal IT teams. But at RONAL AG, this was certainly not the case. Andreas Dusold, Head of IT Support, was glad to have ITpoint’s support.

The RONAL GROUP enjoys a fruitful collaboration with ITpoint and appreciates their high-quality services. "There has been a real change in mindset at RONAL GROUP," notes Andreas Dusold. Other RONAL GROUP locations no longer replace older IBM Power machines with new hardware. Instead, they procure the operating platform as a managed service. The ERP system has also set a good example for other applications and operating systems we work with.

Interview with Andreas Dusold, Head of IT Support, RONAL GROUP

About the RONAL GROUP
Headquartered in Härkingen, Switzerland, RONAL GROUP is one of the leading manufacturers of alloy wheels for passenger cars and commercial vehicles. As a long-standing partner of the automotive industry, the company needs to make sure its rims meet the strict requirements of vehicle manufacturers. The company is constantly growing and has an estashed reputation for customer proximity, innovation and quality work. The RONAL GROUP employs more than 8,000 people worldwide.

The RONAL AG headquarters in Härkingen has approximately 130 employees and is home to many of the company’s major departments, such as technical development, engineering, finance and controlling, sales, IT, human resources, supply chain management, operations, quality, legal and compliance, and marketing and communications.

The visuals were provided by RONAL GROUP.